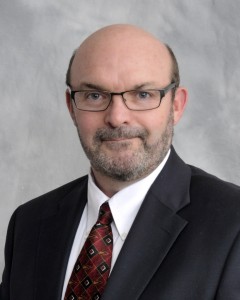 Steve came to Columbus from Jacksonville, Florida in 1977 to attend the Pontifical College Josephinum. It was in 1977 that he was first introduced to the Charity Newsies.  Shortly after the 1977 Paper Sale, the “Great Blizzard of 1978” struck Columbus, and shed a bright light on the services the Charity Newsies provide. “I know I was cold” said Chandler “and I couldn’t imagine how cold someone would be without proper clothing. I was impressed that there was a group of people who cared enough about the community to stand in the cold and raise money to provide kids with warm clothes.”

Steve is a Strategic Sourcing Consultant for Nationwide Insurance. He and his wife of 33 years, Bonnie, reside in Clintonville. Their daughter, Kathleen, is attending Columbus State Community College. He has his BA in Philosophy from the Pontifical College Josephinum and an MBA from Franklin University.